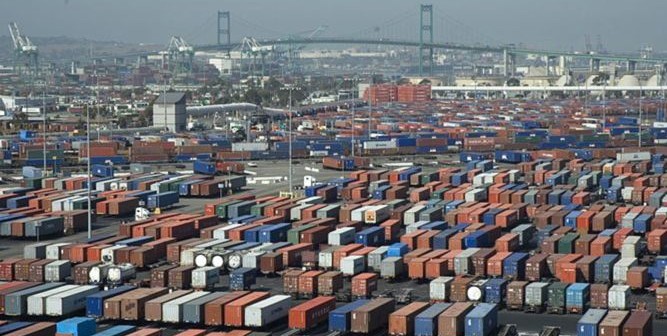 There is a log jam of containers at the major West Coast ports at Long Beach and Los Angeles, California, with up to eight container ships anchored off the coast and a two-week delay in getting goods from ship to customer. There is a range of issues at play, though no one is in full agreement as to what exactly has caused the bottleneck.

Chassis shortage?
Commentators are most in agreement that there is an uneven distribution of chassis to haul the containers from their stacks, outside of the ports. Drivers are often driving miles just to get a chassis to haul a container due to shortages of chassis in one area and a glut in another. Such causes delays.

Large ships?
The size of the ships coming into LA and Long Beach is cited as an issue. The ships are often in the range of 12,000 to 13,000 TEU capacities and during the current rush of goods ahead of the holiday season, a lot of these are coming ashore. Some argue that the lack of capacity to handle such a large ingress of containers is causing problems.

Unions?
One of the most hotly contested issues surrounds an argument that the delays are not being alleviated, in fact, most believe that these are hastened by the protracted negotiations between union bosses and employers. The International Longshore and Warehouse Union, and the Pacific Maritime Association’s contracts already expired in July. Where some point at this as an issue, such is denied by the unions.
Whatever the problems, the backlog is going to get worse before it gets better, with the rush to get goods to market ahead of the holiday season in full swing. The biggest worry is that those goods just won’t make it to market for Christmas if the delays are not tackled…