INDIANAPOLIS — As we continue to see mixed signals from the short-term economy, many are suffering from “stable environment anxiety,” said Eric Starks, president of FTR Transportation Intelligence, in a commercial vehicle market update during FTR’s Transportation Conference this week in Indianapolis.

“Why do you buy a truck or trailer? To move freight!” Starks said in FTR’s traditional mantra about what drives equipment sales.

Freight growth since the beginning of the year has been relatively flat to slightly up, Starks reported, while freight rates have been flat or down year over year, putting pressure on margins.

However, the industrial sector is starting to see some signs of life, with August Industrial Production posting modest grown. The ISM Manufacturing Index has been in the mid 50s for two months, with a reading above 50 indicating the economy is generally expanding.

In addition to freight, Starks said, a key indicator in predicting truck sales is the economy.

Many are suffering from a “stable environment anxiety,” Starks said.

“The commercial vehicle market is not used to seeing a stable production environment,” he said, seeing “normal” as 20% to 30% swings in demand. So the recent stability seen over the last few years is creating anxiety right now. The approximately 2% economic growth we’re seeing in GDP is creating a stable environment that leads to limited freight growth and only a replacement equipment market, so the industry is unsure how to react.

Until late 2008, the trailer-to-tractor ratio at publicly traded truckload carriers generally trended up, but since then, he pointed out, it’s been trending downward.

Another thing we frequently hear is that because the average age of the nation’s truck fleet has increased, it will push fleets to modernize. However, Starks sais, there’s a disconnect in who is buying.

“We are seeing two distinct markets,” he said. “Large fleets, and all others.” Large fleets, he said, are the primary drivers of the new equipment market at the moment. However, they appear to have already modernized most of their tractor fleet, meaning limited pressure to buy new equipment. The bulk of the older equipment is being held by those not buying new trucks.

As a result, North American Class 8 retail sales started to rebound early this year but have recently stagnated. Order activity and backlogs have softened for both trucks and trailers, he said. Trailer orders in July reached their lowest level since the summer if 2010, while truck orders remain soft, but noticeably above year-earlier levels.

Some seasonal softness was expected, but levels have been lower than desired, and backlogs for both trucks and trailers are moving lower. These levels of recent order activity and declining backlogs will lead to weaker production levels in the fourth quarter, Starks projected, because OEMs currently are building trucks faster than orders are coming in the door.

However, Starks predicted that truck orders should start to pick up over the next several months, with a seasonal spike in November, December and January. “To reach our current forecast, we need to see orders for September and October in the low 20,000-unit range,” he said, and would expect November through January to average in the mid to high 20,000s.

Trailer orders are not expected to surge until November or December, but should remain strong through February, Starks predicted.

In summary, Starks offered these points: 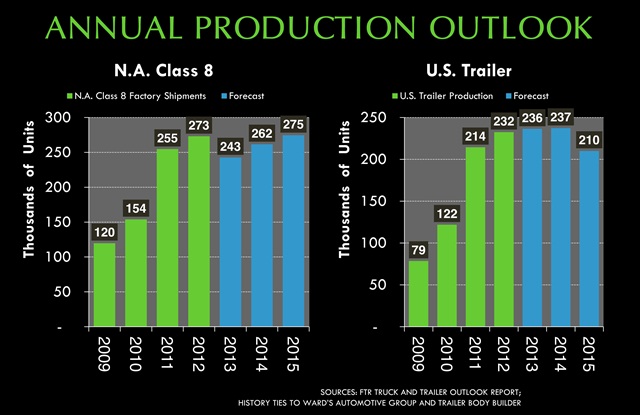